What’s up with men’s scarves anyway? In this post, PGG contributor Jessie, shares his point of view on the latest add-on for one’s get-up. 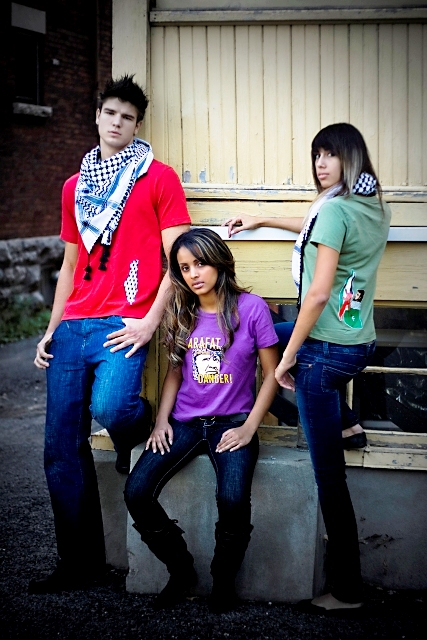 Lately, there’s a fashion trend for men going on that’s a little awkward in Asia, if you ask me. Keffiyeh scarves, a traditional headdress for men in the Middle East, folded and wrapped in different styles around the head or neck. These have become a commodity among teens and celebrities these days.

It became extremely popular when a columnist criticized a Dunkin’ Donuts ad that featured American TV host Rachel Ray wearing a black-and-white silk scarf with a paisley design. There was absolutely no intention on Ray’s part to express any form of symbolism whatsoever. But since the United States has this on-going conflict with the Middle East, they did not want to associate the scarf with them.

So to cut the story short, Dunkin’ Donuts pulled the ad.

But it was too late.

Justin Timberlake, Jay-Z, Kanye West are just some of the big names that started to wear these scarves as soon as the issue got blown into proportion.

People took notice. People buzzed about it. People started to try it. 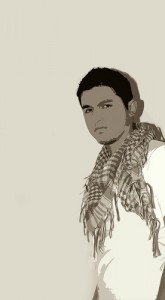 I honestly don’t wear one. It does not look good on me. But I’ve seen a lot of guys who lavishly wear it as part of their ‘get-up’. I keep wondering why. Then I realized, people rock these scarves not because it is fashionable and trendy. Not because it is controversial. People wear it because it serves as a personal statement! Wearing one lets you exude peace and embrace the different cultures and styles of people in other parts of the world.

So when you try to wear one, forget about all the publicity surrounding it.

Forget that it’s a fad.

Wear one because you think of it as a ‘peace sign’ for humanity.

Note from Chris: Though these scarves look very good on some guys, I have to admit that I can’t pull it off, so like Jessie, I don’t wear one as well.

Jessie is a full-time employee in Makati as a Technical and Billing Support Supervisor and also works as a Freelance Event Organizer. He has a strong passion in sports and urban lifestyle. In his spare time, he reads books and magazines, surfs the Internet and plays video games.

Receive the latest in men’s style by subscribing via email

NO scarf!!!! I have actually made a post about this too but I was talking about the weather. 😛

I just hope that guys wearing these scarves are wearing it as a “peace sign for humanity” as what Jessie said.

But I don’t believe they do. I have guy friends who wear it as that because it’s fashionable, as they say.

I do believe, though.

Me three, I don’t even bother to look for one since I think it’s too unmanly na. No offense meant to those who wear it.

There are even others who wear it that’s kind of irritating na, sobra, na you’d think “Are these people aware on what they actually look like?

I only started seeing guys at the malls wearing scarves like that this month. A day doesn’t go by without me seeing two or three men/teens in identical scarves (save for the colors) and it annoys the hell out of me. Do they all shop in the same store? Where do they buy them? I need to know so I could burn it down (I kid! I kid!).

Seriously though, wearing scarves in a tropical country is quite silly but I guess fashion isn’t always meant to be practical.

In my opinion, men or women can wear whatever they want to even if it looks silly on them or if it is not fit to be worn in this kind of climate. I believe that one can wear or do anything as one pleases or if it makes one feel good as long as one doesn’t harm/hurt anybody else while doing or wearing that thing.

I don’t have any statistical evidence to show..but I agree with you Patricio, only people here in the P.I. wear scarves because they think its fashionable. But in the US, its quite of a big deal. Its more of a symbol for them especially after the 9/11 tragedy.

Greenhills shopping centre (or any tiangge for that matter), I believe Bench and PRP are already manufacturing their own scarves as well. But you nailed it right on the head – ‘fashion isn’t always meant to be practical’…

I personally think that the explanation to “justify” its use is an afterthought. I really think it’s shoddy and unfit for the Philippines’ climate.

honestly, in my opinion, people who wear scarves these days are kinda “OA”

it does fit on “some” people. I haven’t tried to wear one, I don’t think i could pull it off… i might try it, but it won’t be much of my liking hehehe…

here are some of what i think people should know before buying scarves…
* something that actually fits you
* not suitbale if you do a lot of things. the scarf you’re wearing may trouble you
* don’t tie it too much on your neck, you might get strangled by people or worse! get mugged
* not with those hairy strings at the end. kinda reminded me of the ones hanged on jeepney’s with the words “God Bless Our Trip” LOL!!!!

not to self: buy a scarf that doesn’t match the design in Mindanao… something more urban would do 🙂

[…] male scarves which I featured recently is a style from the Middle East (also a part of Asia). They are now being […]

Shemaghs (in the Middle east) or Sahals (in the Philippines), I believed became popular when Western Special Operations Forces (e.g. Special Forces, Navy SEALs, Brit SAS and SBS, US Delta Force)started their campaign in Afghanistan and Iraq. Each Shemagh symbolizes one tribe/clan and wearing that shows you are a member of that tribe/clan. In the early campaign to hunt OBL (Osama Bin Laden) and Al Quaida, it is very important to make allies with known Taliban/Al quaida enemies, and if you succeeded in doing that, you have to wear the proper shemagh associated with that tribe. Only special operatons troops go and make contact with these tribes/clans, thus, line soldiers don’t actually wear them. They realized (just like what the Brit SAS had found out decades ago) that Shemaghs are very useful for them, compared with a triangular OD scarf (which also became a trend in the late 70’s and 80’s, the Bandana) so most of these special forces guys wear their shemaghs almost everytime they go on ops. Most airsofters here in the Philippines followed the “fashion trend” of Western Special Operations Forces in Afghanistan and Iraq. Thus the Sahal became readily available. Sahals are way cheaper than a shemagh, though sahals are thinner than a shemagh and has only one side that has color on it.

I hope this helps.

i admit, napabili pa tuloy ng isa pa… and even my friend gave me another one.

Men who wear scarves are silly and gh3y! They’re like brainless zombies walking around the streets and malls trying to look cute and aztig. what’s even funnier is the expression on these peoples faces – that “arrogant, im too cool, shit the weathers really hot, but im still cool im sporting a scarf” expression.

This stupid trend is like a revival of the “pop-the-collar on you fake lacoste, i’m supafly!”

its nice.. if u live in a cold country..
but to be honest.. it looks absolutly horrible to pinoy guys..
nung umuwe ako all i see are trying hard.. wannabes that wear a frickin scarf on a frickin hot country..
pero meron din bagay like the guy in the brown pic.. halatang hindi wanabe.. u know? lol

…..these items are only worn by our Muslim brothers….since they are originally used as a headdress it is very symbolic to them…..we should not use this item in fashion esp. if you’re not a Muslim….

I’ve seen a lot of men wear scarves today, and it isn’t that bad to look at; including some of the most famous in Hollywood. Although there are some who do it just for fashion, we really can’t blame them because scarves are a lot useful and stylish if you think it over. 🙂