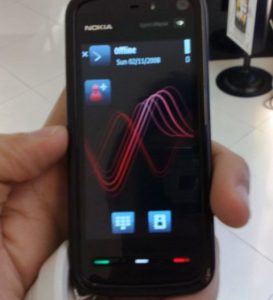 It has been like ages waiting for 5800 Xpress Music phone from Nokia and I’m very happy that it is finally here. Surprisingly, it’s not as expensive as I thought it would be.

At only 18,000 Pesos, it is hard to imagine that a new phone from Nokia containing cool music features would cost only this much. As what I have seen in the past from Nokia, I expected it to be more or less 30,000 Pesos. Anyway some of 5800’s nice features are:

While the features are really nice, the only thing that makes me wonder is why the internal memory is only 81MB? I think they should have added more since this is a music phone. But no need to worry since it has a memory card slot of up to 16 GB anyway.

And for some reason, I don’t understand why all music phones that come out are being compared to the iPhone? I don’t know but I think it’s weird. It just makes the iPhone more overrated. Just take a look at a spoof ad I found below from BlueTrigger. 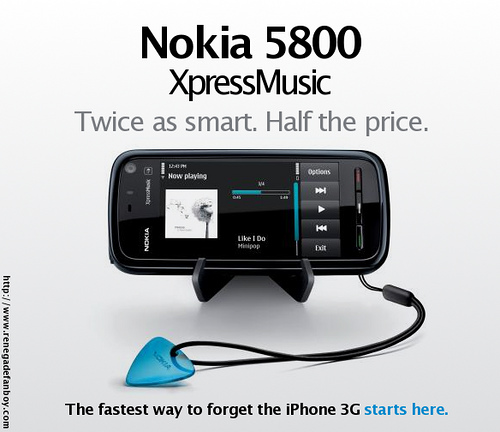 Between this and the iPhone, which one would you choose?

Not yet subscribed to Pinoy Guy Guide? Subscribe now via email to get the latest updates

apple can market their products and actually become benchmarks, despite the flaws of the product. genius.

touch screen is in..

Look at the spoof pic. With the black cord and blue nokia triangular piece, it is as if it looks like a little devil about to crush the iPhone.

maganda nga ‘to… matagal ko na din ‘to inaantay kaso hndi daw to maganda according to some reviews and new buyers… sayang naman! 🙁

angelo – for some reason, I don’t feel comfortable using touchscreens

Bunsoi – would you choose this over the iPhone?

rai – really? what did you find out in the reviews?

Got one of this a month ago. Maganda and I am satisfied with my new 5800 XpressMusic phone. Traded my N80 with this. I have wanted to buy the Iphone but instead opted for this. Touchscreen din siya mas mura pa. You should get one for yourself.

Thanks for the info. I was wondering if it would go down to 15K-16K though. Haha. Planning to sell my old phone to buy this.