Have you encountered photos in social media of people with pinwheels? If yes, it’s a movement by the ECCP and AIESEC to encourage investments in renewable energy. I have participated by posting a photo of myself (on Twitter and Instagram) holding a pinwheel captioned with my New Year’s Resolution and the hashtags #Renew2015 and #SwitchRightOn. It’s a really fun way of reflecting.  You get to make your own pinwheel while thinking of ways on achieving a renewed you this 2015.

Speaking of 2015, the time for New Year’s Resolutions has arrived. I am not really that person who makes resolutions yearly since I foresee that I will just break them. This year, however, I chose to make some applicable in different aspects of life (social, family, career, personal, etc.) since I’m hoping for a year full of improvements, achievements, and learnings. Who doesn’t anyway?

Having said that, I came up with a list of five common resolutions people make for the New Year. Due to these being common, these resolutions can easily be broken. With that, I’ve listed simple (which may be obvious but overlooked) ways/tips on how to accomplish the resolutions.

1. “It’s now time to burn those holiday calories and start a healthy lifestyle!”

The holiday season can be equated to eating a lot of food (ikr, eating’s fun!), and food can be equated to weight gain. People now turn on their “healthy living mode” by hitting the gym or starting a diet plan. However, there is this one word which prevents people from accomplishing this: Laziness. People may do this religiously at first but at some point, laziness will hit them and would then do something else. In a more Filipino saying, ningas-kugon lang.

TIP: Have a “healthy living mode” buddy. Working out or dieting would be better with a partner since you can remind one another of your goals. Plus, it’s more fun with someone, right? Just don’t be lazy together. You can make a deal or a game that whoever misses a gym session (without a valid excuse) would have a consequence or something in order to push both of you since people tend to be competitive in games.

This is probably the easiest New Year’s Resolution to break. There are a lot (I mean, A LOT) of distractions which hinder this. It is tempting to buy new gadgets and clothing, travel, or try new restaurants. I’m personally guilty of this.

Use one as a Savings Account (SA) and use the other as your Consumption Account (CA). Allot at least 60% of your salary (or allowance) for your SA and the remaining 40% for your CA. Do not use the money on your SA unless it is a very big investment or an emergency situation. Only use your CA for dining, clothing, gimmicks, transportation, and any other stuff. Trust me. This works. Oh and in case you’re paying for bills, you can do a 50% SA, 30% CA, and 20% Bills proportion if possible.

3. “This coming year, I’ll be a more organized person.”

Every start of the year, people make plans which would guide them throughout the year. Due to this, people resort to the use of planners as an aid. However, there are people who lack the discipline in using their planners all year-round, keeping most pages blank by year-end. The fun of spontaneity and the “pag planado, di natutuloy” mentality hinders people from planning and becoming more organized. 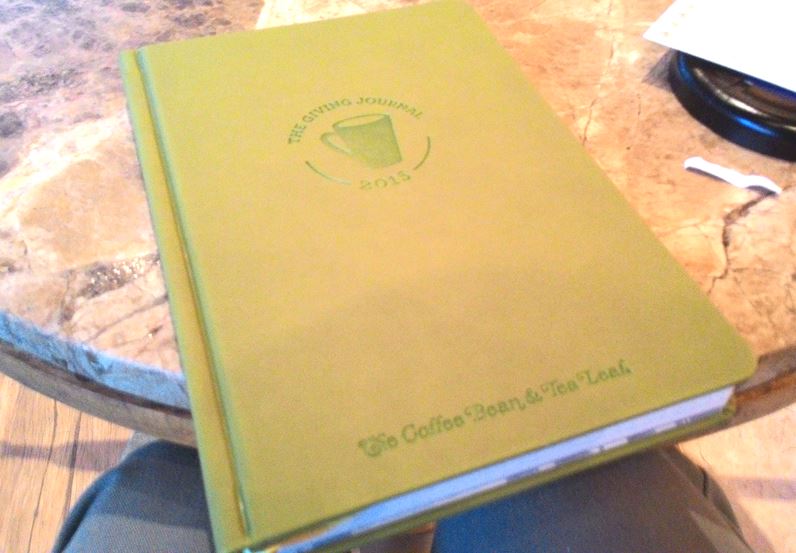 TIP: Get a good (depending on your view of what is “good”) and not-so-cheap planner. It may be contradictory to what I said earlier about planners but these are still one of the simplest aids in achieving a more organized life.

In my case, I’ll be using The Giving Journal from The Coffee Bean and Tea Leaf. This would be my first time to use a planner so I’m kind of excited. Oh and I’ve mentioned that it would be better to get a not-so-cheap planner. The reason why I said so is that it would be a waste if you end up not using a planner which cost you much. In layman’s terms, mahal yan kaya dapat sulitin.

Who wouldn’t love to learn something new, right? Others may find this easy to achieve but for others (which I think includes me), it isn’t. Some people lack the courage and drive to try or learn something apart from what they are used to and just stick to their comfort zones.

TIP: Make a bucket list and write it on a piece of paper. It would be better if you could hang it on a wall. Try to do those items one per quarter, per month, per week, per day, or whatever schedule you’d like to do. Just make sure that you would follow this schedule religiously. Cross out every item on your bucket list once it’s done. It’s fun and fulfilling crossing out the items since you would see your progress.

Another idea: Write things you want to do/learn on strips of paper, fold or roll it, and place it on a jar. Get a random strip of paper every day or every week (again depends on you) and do whatever’s written on that piece of paper. Once done, transfer the piece of paper on another jar. By the end of the year, you can read through the contents of the jar and look back on what you’ve accomplished.

We will probably encounter at least one person saying or posting this line as their resolution. Another variation would be “This year, I will be a better person.” To put it simply, the issue (at least for me) with this resolution is that it’s often too general, too vague. What do you mean by new or better? What aspect would you like to renew?

TIP: Ask yourself first: what characteristic needs improvement? Is it your personality, confidence, physical appearance, or career? Once you understand this, brainstorm on ways of achieving it. At this level, be specific (as much as possible) since these are the things you’ll eventually do and not just some vague, motherhood statements.

When doing New Year’s resolutions, just commit to one or two. Yes, it would be nice to achieve more but that would seem forced and unrealistic. Remember that doing resolutions is not a contest of who can accomplish the most in a given year. It’s about promising yourself something, and making sure to keep it until the end of the year.

Mac is a 21-year old Research and Account Officer in Quezon City. He’s also a part-time student taking up his Master’s degree in Marketing Communications. He’s a simple guy always seeking to try out new experiences and also a self-proclaimed “probinsiyano”, lakwatchero, and a wanna-be foodie.

Nice article.. Good job to the writer… I will try the first two. 🙂

Thanks JM. As for me I want to learn something new this year.

[…] How to not break your New Year’s Resolutions – Each year, we tend to break our new year’s resolutions […]