Why isn’t the Philippines a Football nation?

The 2010 FIFA World Cup in South Africa has been on for almost a month now and in a few days time, the entire world will witness the final game which will determine which country is the new champion of the most popular sport in the world.

But sometimes, I couldn’t help it but ask myself why isn’t the Philippines a football nation? 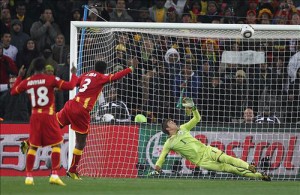 I just can’t believe how we are all missing a lot in such a wonderful sport which takes the world by storm every 4 years. If you are not familiar with it or haven’t watched any football before, take a look at the short video below. It’s one of the best matches in this year’s games. Exhilarating!

Now just a little background. I have extreme love for football. This is because I grew up in Kenya (yes, that’s in Africa) where football is the main sport and basketball is not that popular. When I returned to the Philippines when I was 10, I was surprised to find out that it is the reverse here. Basketball is the primary sport and football is virtually unknown. In most Philippine schools, there aren’t even football fields and the sport is not even included in the PE Curriculum. Deym! 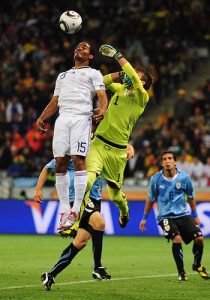 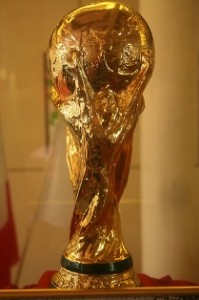 I do think that the Philippines really needs to catch up in football and in other athletic games. Even nearby Asian countries are doing well in the sport. Just take a look at South Korea and Japan – they are competing in the World Cup and they even co-hosted the games in 2002.

I believe that we Filipinos will do well in football because unlike basketball, you don’t need to be a 6 footer to be good in it. I hope the time will come when our nation will also learn to be fond of football. And if it isn’t too much to dream, I hope to see the Philippine national football team at the FIFA World Cup someday!

chris! why did u grow up in Kenya? but ur Filipino?

A basketball court is 10 times smaller than a football pitch, and therefore much easier to make. Even in prison you can even build one because it requires less space.

john – yes, I’m 100% Filipino (and proud Pinoy :D). I was born in the Philippines but when I turned 3, my dad’s employer assigned him to Kenya. As a result, our entire family moved there. I was already 10 years old when we returned to the Philippines.

It was there in Kenya where I learned football in school! 😉 It was part of our PE classes.


Franz – I agree. you do have a point. But why is it that other southeast asian nations (which by comparison are also developing countries like us) are able to play the sport?

This is just my opinion, I think it goes back to the mentality of filipinos…being colonized by the Americans wherein at that time, basketball was a big sport…so even if America is not that fond with basketball anymore, countries who have been colonized stays to this idea until now.

I remember the old times. We play street football with 4 bases and plastic ball tossed by your opponent to be kicked and you pass one base to another base to get a score. The rules are very different from football in the World Cup. My point is, even we try to play the real football there is no place that we could afford to play for free. There are only football fields present in few private schools and universities in which a student can enjoy if they’re interested in playing. Basketball became the country’s sport because of its availability and space requirement. Maybe in the future, we would have bets in World Cup if we have a good coach and training in the school.

hi! i also asked that question. i actually do not understand why filipinos are more fond of basketball when in fact it’s not really the sports that the characteristic filipino is more suited to play. basketball requires an impressive height, while soccer requires agility and stamina. we filipinos can engage in a kind of sports where we can actually and realistically excel. sayang lang because the government does not give support to the football association ng bansa natin kaya they worked for privatization of the organization instead.

To me it is not actually for Philippines not being a football nation, it’s the fond excitement for any game we have around. But for me, the primary reason is the weather, too hot in the summer that the Filipinos don’t want to get dark under the sun. And in rainy season, the field is muddy. Well that’s what I can think of, but football is a great game.

There is no doubt that we Pinoys have a great passion for sports, as a matter of fact we have some of the worlds best in various fields.. to name a few we have Manny Pacquiao in Boxing, Efren “bata” Reyes on Billards and bowling’s five time world cup champ Paeng Nepomuceno.
So why is it that we are not into football like any other nations?
Well, we do have a National Team.. and would you believe that its actually one of the oldest national team in asia?
Let me share to you guys my thoughts on the possible reason why football isn’t that popular on the “pearl of the orient seas”.
In a country that is divided by so many islands, its not impossible that we have different “recreations”.. is that enough to conclude why we’re not into football? of course not.
Football requires a large venue.. and if you go to the streets of Metro Manila, and other major Cities in the country.. you’ll see how crowded the Urban Areas are. One reason maybe, why basketball is more popular because its more accessible in a way that you can set-up a court in every corner of the streets, and create a hoop at a lamp post.
Another possible reason, is that our government has a very small budget for sports.. well, we are in a third world country.. the government have other things to prioritize aside from their of course.. ahemmm… pocket. lol!
So what do we do now to awaken our country to the most popular game in the world?
Hmm.. i guess if only theres one person in the country,(a politician or a business tycoon maybe) that would really dedicate time and money to develop our country into a football nation, by making the sports known and rediscovering talents from the four corners of our country.. then winning a world cup title for our beloved Philipines, won’t be far from a dream.
my apologies for posting a very long reply to this blog.
just sharing my thoughts.. =)

I think it’s because Football, is such a low scoring game. That’s why only a handful of Filipinos can appreciate it. I tried watching Football before. It’s exciting only when someone is about to score. and after a couple of hours the final score is 3-1. 🙁

Although football does not require height, it is difficult to master and be good at unless you start playing it as a child.
The way to develop it without using a lot of space is to introduce FUTSAL to grade schoolers. The usual excuse about space will be avoided since you can use any basketball court and regular rubber shoes. We have thousands of basketball court throughout the country.
We don’t even have to use lines of official markings as long as it is a few-sided games like 3 on 3 or 5 on 5 at the most. This is how kids will develop their dribbling, passing, and attacking skills. The only time they should be in a big field using 11 a per side should be around high school just to adjust how to play the long ball and they can use any crappy field since pitches in our country are terrible (even in college).

1. Because of the American mentality. SUCKS!

Its about time filipinos should realize this. Basketball is a good sport no doubt about that , I used to play it before. Then I was intorduced to football. At first sabi ko , ang boring! ang hirap maka score. But as you go on you realize that the game is not just about scoring! There’s so much more into it. 😉

because watching football needs intelligence. something you won’t find from an ordinary filipino

bossing chris, there are schools here in the visayas that has football field and it’s still popular particularly Bacolod, Iloilo.
Baseball is popular in Northern Samar. Some schools there have baseball and football field as well.(off topic)

Filipinos have a potential in football because of having Spanish blood,but however the sport is not popular in the country because of basketball.Actually,if USA andJapan did not rule the country.We could defeat Qatar like 8-0 and lose in the Round of 16 in the World Cup

[…] came back here to the Philippines for good during my early teens to continue my studies, I found it disappointing that football was virtually an unknown sport here in the country. It wasn’t as popular and so I thought that maybe the best chance for me […]

[…] kid is football. It kind of sucks that not many people here in the Philippines play it as evidenced here and so I try to compensate by trying other sports or having at least a working background of other […]