Be wary guys, especially if you are in the reproductive age! According to the LA Times, researchers from the Cleveland Clinic have found that cellphone radio waves decrease the sperm quality in men. 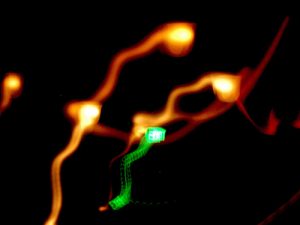 Here is an excerpt from the LA Times stating the results of their study:

The new study by the same research group, published online today in Fertility & Sterility, took sperm samples from 32 men and divided the samples into two parts for a test group and a control group. The test group specimens were placed an inch from a 850 MHz cellphone that was in talk mode. Measurements taken after the one-hour exposure showed that the sperm exposed to the cellphone contained higher levels of harmful free radicals and a decreased amount of protective antioxidants compared with the unexposed sperm. These factors caused a decline in the sperm’s function and motility and in the overall health of the sperm. However, there was no significant difference in damage to the DNA of the exposed cells.

It was also mentioned that guys should avoid putting their cellphones in their pockets especially when using their headsets to conduct voice calls. So the next time you put your mobile phone in your pocket – think twice because it might affect your fertility and your future.

After reading the news story, I guess I will have to bring a separate clutch bag just for my cellphone.

Want to know the latest news for men? Subscribe to Pinoy Guy Guide

Discuss this story at the FORUMS

8 Attractions To See in Manila this Holiday...

Four Parkour Skills I Learned from Schick and...

oh…i love talking while on the go so i just use my headset , but now with this information…yeah a bag maybe would help it to avoid exposing my future generation to free radicals…heehhe

i am not sure if this may be true, but surely there are radiation or like a magnetic field emitted by the phones, just like the am/fm radio, the problem is we dont know the extend of damage it could do, the study made according to the source is an independent study thereby making it subject for further evaluation…

is it true? maybe… until further notice or developments and studies

I’m extremely impressed with your writing skills and also with the layout on your weblog. Is this a paid theme or did you modify it yourself? Either way keep up the nice quality writing, it is rare to see a great blog like this one these days..