Why can’t Philippines be a fashion trendsetter? 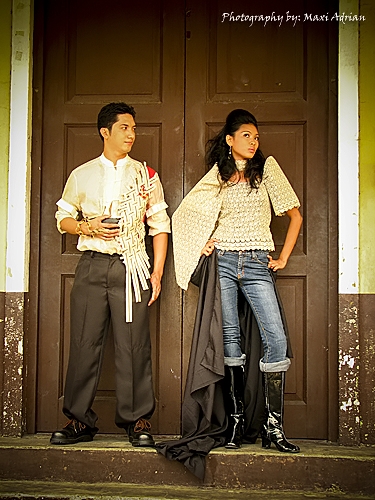 Today, I was emailed by an Italian-American reader who stumbled upon Pinoy Guy Guide while he and his Filipina girlfriend were searching about Filipino pop-culture and lifestyle. It was very alarming when he told me that the Philippines has no originality when it comes to style and fashion. I’d like to quote an excerpt of his exact message to me below:

“…I studied history in college, so I know a deal about countries who have been under colonial rule. I always just wonder to myself how much more culturally rich and vibrant those countries would be if they didn’t continue to follow in the footsteps of their colonizers, even after gaining independence.

The Philippines, and other countries formally under colonial rule, have so much potential in their artistic and cultural talents. Yet, what ends up getting publicized are the latest fashions from abroad. I know foreign trends are inevitable, but even highly American-influenced countries like Japan, Brazil, and Australia still try to break away from the mold. They themselves have set global trends that Americans now copy. I believe the Philippines can do the same…”

Alarming isn’t it? But what he pointed out is correct. If you have noticed, Western countries are starting to adapt style influences from Asian countries like Japan and Korea. As a matter of fact, I have received several emails from American and even European guys asking me how to style their hair the Asian way. If you even take a look at the bottom part of this blog, one of the most viewed items is my first PGG post which is about Gatsby Hair Wax – a Japanese hairstyling product.

Even male scarves which I featured recently is a style from the Middle East (also a part of Asia). They are now being worn by Kanye West, Justin Timberlake and other popular icons from the West. As you can see, the West is now starting to adapt Asian trends.

The list could go on and on but wouldn’t it be better if there is a worldwide trend which we can proudly say is started by the Philippines?

As what was pointed out by the reader who sent me an email, influences from foreign countries are inevitable but like him, I also hope that a day will come when the world can say that: “Oh that style was started by the Filipinos”.

Although we were under colonnial rule, the best asset of being a filipino is that they are innovators. Check history and you’ll see that there are a lot of things we Pinoy was able to contribute to the world. A lot of these things has been patterned from a Pinoy’s discovery.

Like many trend makers (as a whole), it all goes back to the point that we are not given the right avenues and funds to support such activities. No matter how good and how hard a fashion designer can become – still, MONEY is a problem and 2nd, suport from the right people to get them there.

i find the picture above which features the modernized Filipino clothing very COOL..

While reading it Chris, I felt a sudden hit on my pride when the person who emailed you said, “Filipinos doesn’t have originality”, but then I suddenly realized it’s true.

Obviously, we’re not only copying their clothings, but their lifestyles as well. Look at the cafes in the Metro, all of them are whether European or Western-inspired. I must admit that I like it.

I don’t have really something sensible to say, but just to admit that I myself follows what’s IN in the US, rather than here in the Philippines.
hmp.

vir_antonio/Patricio: I agree, that they need government support and also people who would indeed buy their original products

fashion also reflects the consciousness of the people who wear the clothes. the lack of originality in philippine fashion simply reflects how we are still searching for the filipino identity that we lost when we, as a people, underwent that long history of colonialism. this identity crisis is true not just in fashion but even in other things like food, entertainment and literature. it is still hard to answer the question, “what is filipino?” more so “what is filipino fashion?” for now, we will make do with this hodge-podge, American cum Asian, crossbreed, pastiche look and trust filipinos to be good at it, too.

well the thing is, we all know that the filipinos has this “gaya-gaya” attitude. don’t believe me? take a look on our television shows, commercials and stuff… hays… wala na nga tayong originality lahat kinopya!

[…] is an excerpt of a letter written by an Italian-American guy to the Pinoy Guy Guide. I wonder what bryanboy and mnlstyl have to say about this? Categories: UncategorizedTags: Related […]

[…] this style will continue to make us Filipinos proud of our culture and make the world aware that we can start our very own style and fashion statement! So guys out there: buy and support our very […]

[…] Why can’t Philippines be a fashion trendsetter? – I received an email from an Italian-American who is very concerned why Filipinos just copy trends […]

well the guy’s italian. he can’t help it haha

i might have to disagree to the notion that we are still trying to find our identity…Filipino youth today are very much established…we know what is right and what is wrong and we definitely stand up for what we believe in…when it comes to fashion, i strongly believe that young Filipino designers today have the creativity to create clothes that are nationalistic in nature…all they need (i guess) is the right “exposure”, if you will, to international market…i mean there are too few opportunities for Filipino designers to show what they are capable of doing…

if their designs are marketed internationally, and foreigners buy the idea, then i guess our kababayans will do the same…after all most Filipinos love imported products as some of you have said….imported products that are locally produced????…hahaha…get the idea???

we can’t be a trend setter because our country is poor. economy supersedes culture (fashion) so as long as our country is poor whatever cultural innovation that we have will always be looked down upon as third world. if a first world citizen willimitate us, by extension he becomes thrid worldly. and nobody wants to look poor.

korea and japan are industrialized countries, so they have the power to influence other countries.

since 2008 a lot of pinoy pride shirts have mushroomed all over the archipelago. i guess we have to start somewhere and rhett eala’s philippine map is a good start.

well, the fact that the male model pants is too big for him.
maybe that’s why. 🙂

Ladies and Gentlemen.. I just want to tell you guys that there’s no such thing as gaya-gaya in fashion. All of the styles now.. revived lang yan from earlier years. nauna lang itrend sa ibang bansa ung lumang style.

It’s sad, but what that guy said is true.
Pinoy Guy Guide,we share the same dream. I hope the time will come when the Philippines will have a very distinctive style and will be woven into global culture.
Let’s keep pushing!
Kaya natin yan! I’m with you!

Filipinos can’t be fashion trendsetters, because Philippine’s fashion sense is absolutely horrid, this is my opinion. If I went to school wearing that, people around me would be giving weird looks & start giggling.

I visited Philippines last summer & it’s like everyone lives in a cave. I’m studying abroad there next school year, I’m bringing ALL my clothes/shoes, because it’s impossible to find a clothing store with decent looking clothes.

I agree with MENFASHION’s statement.
Fashion is cyclic. There’s no such thing as innovation.
Usually, innovations may set the trend for a while but they eventually fade. Why? Well that’s why they call it a “trend.” It becomes in, them it fades out.
That is why even with the danger of being called “imitators”, we should stick to the classics. For one, they are called classics because, well, they look classic. The design never fades, whatever era or location they are worn in.
The picture above, is one reason why we shouldn’t innovate. Look at those horrendous baggy pants! They might be fashionable, but they sure are far from being stylish! You think you could wear those in a daily manner? They are designed for a fashion show, for the catwalk, but never fot the streets, never for formal or even casual events. You might stand out, but standing out is not always good, especially when your looking queer.
Stick to the classics. Don’t worry about innovation in clothing. There are other better ways to innovate.
PS: the fact that you are worriedly affected by the comment of a foreigner, in itself, is colonial mentality.