When you lose trust in your hairstylist

I went to my hairstylist today to get myself a good new haircut for the hot summer days. I was thinking of retaining my modern short haircut with spikes on top and bangs in front but at the same time, since it’s summer, I wanted to apply the good old barber’s cut on the sides and at the back. Basically this is how I described it to my hairstylist (just use your imagination). 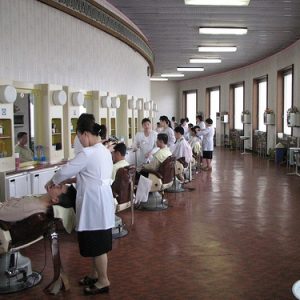 He has been cutting my hair for the past 8 months and the style was basically the same throughout. I trusted him a lot because all that time I was always satisfied with my hair and I would always give him a tip each time I visit amounting to around 60-80% of the cost of my haircut until today.

About a month ago, I asked him what would be a good hairstyle for men this coming summer. He told me barber’s cut, semikal or anything short will do. But at that time I didn’t want to cut my hair short because I wasn’t really in the mood for the summer – not yet.

Fast forward to today, I told him what I wanted as mentioned above and I was a little surprised that he was quite uncomfortable, even fidgety about the idea. But since I trusted him, I ignored that.

A bit later he seems to have trouble searching where he placed the electric hairclipper but luckily, he was able to find it. When he was already starting to cut my hair on the sides, he asked me: “So why do you want this haircut?”. I just replied: “It’s summer and I wanted to try something new.” But at the back of my mind I was wondering why he even asked me that question where he was in fact the one who was suggesting it just a month ago.

Throughout that haircutting session, I was bothered by his question. I was thinking that maybe he knows that it will not look good on me or probably he’s not good in doing it. I was getting really uncomfortable on my seat thinking that I may not like the outcome of my new haircut so I just expected the worst. But guess what? It came out to be exactly how I wanted it to be! I just realized that probably the reason why he was uneasy with the haircut is because it is not his expertise. It really took him more than 40 minutes to get my hair done while in the past 8 months (with my old hairstyle) he could complete my haircut in 20 minutes or less.

I think the next time that I will try to get this kind of haircut, I will go to a different place. Yeah, he did get it right but I wouldn’t want to risk it again the next time.

How about you? Do you stick to just one barber/hairstylist? Any bad haircut stories?

Discuss the latest men’s hairstyle by joining the PGG Forums

A Pinoy Guy should be able to…

stick to one. no doubt.

After eons of searching for a decent barber i finally found one. But before, i had a string of bad haircuts. the worst was in going straight. They had the newbie hairstylist cut my hair. It was a disaster! the back was all jagged and he accidentally snipped my nape!!! buti na lang tip lang ng scissors, so it was a small cut. Ngayon sa barbero na ko nagpapagupit, malinis at maayos pa.

so how does it exactly look? any pictures?
i change every once in a while – trusting the korean salon to do the styling. they always know what is “bagay” for a person, given the current length adn style of your hair.

Jessie – I always stick to one too. But I may think twice about it next time.

Zhauro – I also hate it when stylists accidentally cut my nape. Talking about being careful.

angelo – don’t have pictures yet but though he made me feel uncomfortable, I’m still happy with the haircut.

by the way, speaking of Korean salon. Let me guess? Is it Tony and Jackey? 😀

well if I didint like the service of my old stylist definetly I will change…. But if not why take a risk. Just like they say, If it aint broke dont fix it

@ CHRIS (author)
nah. its a small one behind rockwell (near the korean community over there) i dont even know the name but the owner remembers me by face and she gives me discount everytime i go there. 🙂

i guess you were just paranoid or a little apprehensive about trying a new haircut that it may not end up nice on you..

I wonder though if haircutters from salons have more taste and expertise than your good old barber next door. I mean I know it’s cheaper to have a haircut with your ‘barbero’ but if you’re style conscious about your hair, can you trust them to do the job?

When I was young, when I was not that too vain with my looks, I don’t give a damn care regarding who will cut my hair.

Nowadays though is way different. I’ve been going in a class A salon both for men and women here in Davao, and I’m satisfied the way the hairstylist do my hair until now.

TIP: Always stick to one. Others tell me to “Try others” so that I’d get another style, pero hindi ako komportable. Iba pa rin talaga kung sanay ka na sa hairstylist mo and vice versa. Sensitive xa if I’m liking the way he does my hair.

i had been a regular client of a salon and a barber shop, when i just what a little trim i go to the barber if i want a better cut i go to JC salon, the salon then produces a good cut on my hair whether long or short, however when the senior stylist left, the junior stylist became senior, i told him that i want to grow my hair long so a little trimming and texture will do, he made me look like a punk rocker, i went to the barber after to repair the cut.

few months back my hair grew long, and i decided to give JC another try, but only worst could be seen, i will not go to JC salon again…

CouragePhilippines – Well I think that hairstylists have an edge over barbers in that they know different and the latest haircuts.

Barbers are also good but usually you have to be the one to tell them the hairstyle you want.

ho guys, ive actually tried many stylist in bench fix, but my last stylist in market market in taguig, RUINED my hair, i was really pissed off, and i decided not to have another haircut in bench. hehehehe. My friends recommended me to go to “Going straight salon”, yes i know what you guys are thinking, its for girls, but actually, they do have a male hairstylist, by the try not to get a gay stylist, because they tend to cut your hair, which they like! ( they ruined my friends hair) ! soo after i got my hair shampooed, the stylist came and i explained the hair which i want, long back, long side burns, and just neat, after minutes in progess, me and my friends were getting worried, because i looked a bit different, but when it was finished, i was shcocked!!!!!!! i mean it guys, i looked so different! it had a spiky look, guys i recommend you guys 2 go there, its only p130 a haircut, w/ shampoo, style, and they also have products and a privillage card

in fact ill be going back tomorrow with my friends to get another haircut, as its summer, and my hairs loosing its shape now, from my comment my friends would say im the most”maarte” of the boys or from my mom “malandi” hahahahaha, thanks pgg! more power!

by the way guys, when you get a haircut in the salon, try not to use a blade or the electric shaver, stick to scissors, well it depends on your style that you want!

had my summer haircut last week. tried something different hehe

I used to be a loyal customer to BENCH FiX salon. I think it was my choice for about 3-4 years. It was just recent that I decided to step out of the box and scout for some good reviewed salons. I checked out Acqua salon in Trinoma. Haircut is at 280pesos and the service is really good 😉
I also liked what the stylist did to my hair. I had a photo with me and explained the type of cut I wanted. He did it and I loved it! 😉

Bench Fix in Market Market is a training center you should have gone to other branches. hehe.

During my high school days, my father is the one who always cut my hair according to his preferences. But when I entered college, every month, I always go to different salon cause I can’t find the right one. Until I tried the red and white salon infront of our university premises. For more than a year, I always go there just to have my haircut for only Php 70.00. But when my haircutter is gone (I don’t know were he went) I tried to go to Going Straight at SM Baguio and until now, I am still getting good service for only Php 130.00. I always say: “Kayo na po bahala. Basta po ung babagay.”