Save Me San Francisco (from spending too much)

One of the nicest perks of my job as an IT professional is that you get to travel to office locations across different parts of the world. The start of 2013 is really awesome because I am fortunate enough to have been selected by my company as one of two employees to travel to our office headquarters in San Francisco, USA. 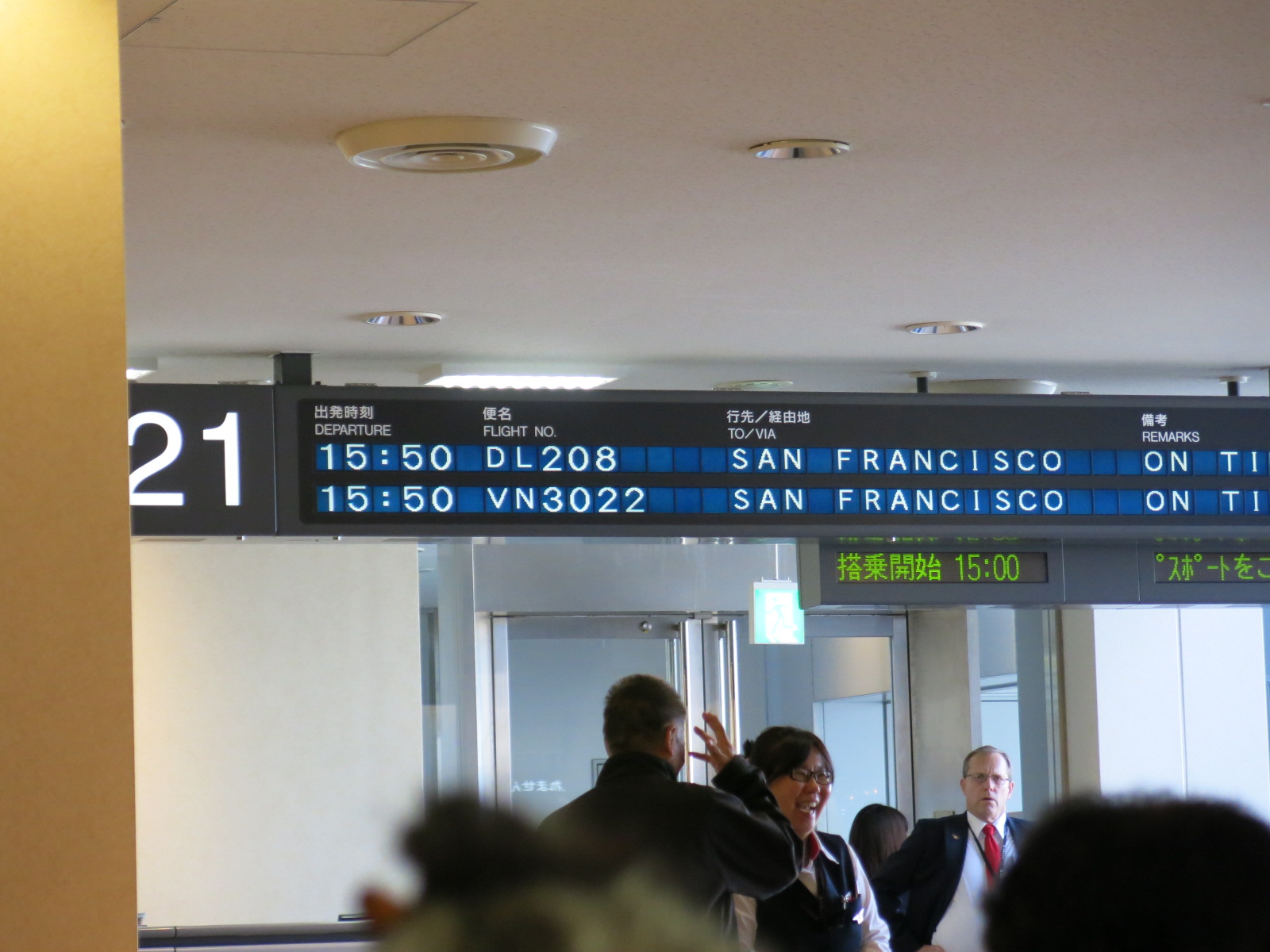 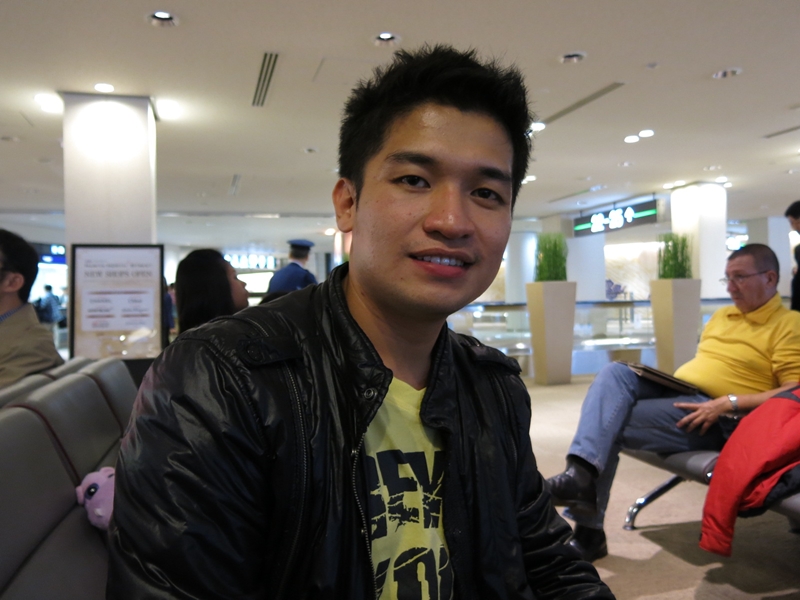 So if you’ve been reading my status updates on Facebook and Twitter you’d see that I arrived here in San Francisco last Saturday, March 9. The flight from Manila to San Francisco was about 19 hours long including a brief stopover in Japan and despite the exhaustion, me and my colleague Paolo, went straight shopping for clothes within a few hours after our arrival. Just imagine our energy levels. 😉

Our first stop is a shopping plaza called Gilroy, somewhere near San Jose, California. The area is filled with lots of factory outlets of signature clothing brands where you’ll get discounted prices of labels like Calvin Klein, Aéropostale, Adidas, Nike, True Religion, Vans, Gap, Hugo Boss, Lacoste and a whole lot more. I felt like a kid in a huge candy store and two hours later into the plaza, I found myself carrying three boxes of shoes, a bag of clothes and two boxes of fragrances. And it’s not only me. Paolo, my colleague, got himself sunglasses, clothes and shoes too. The discounts and price cuts are just driving us crazy. 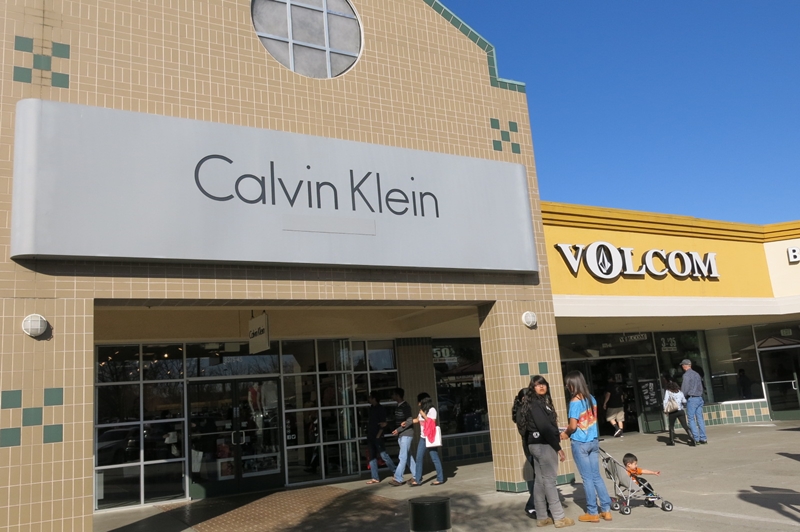 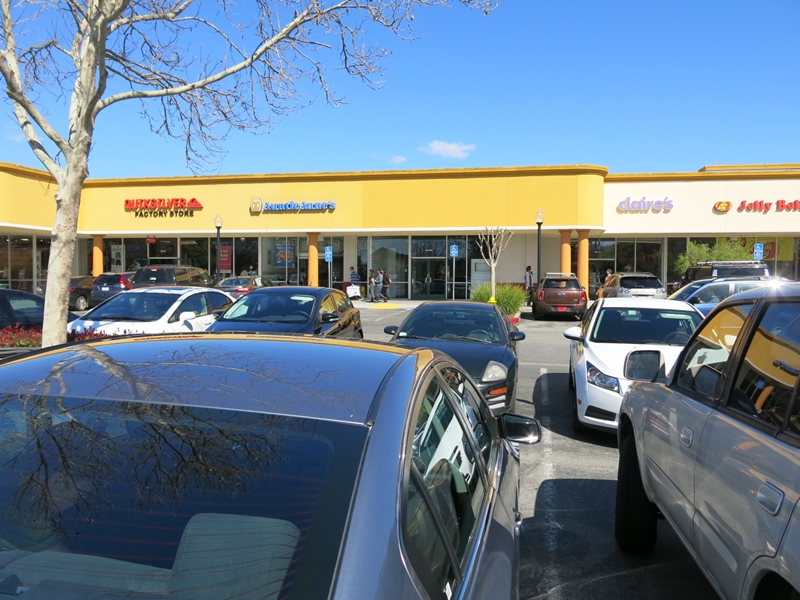 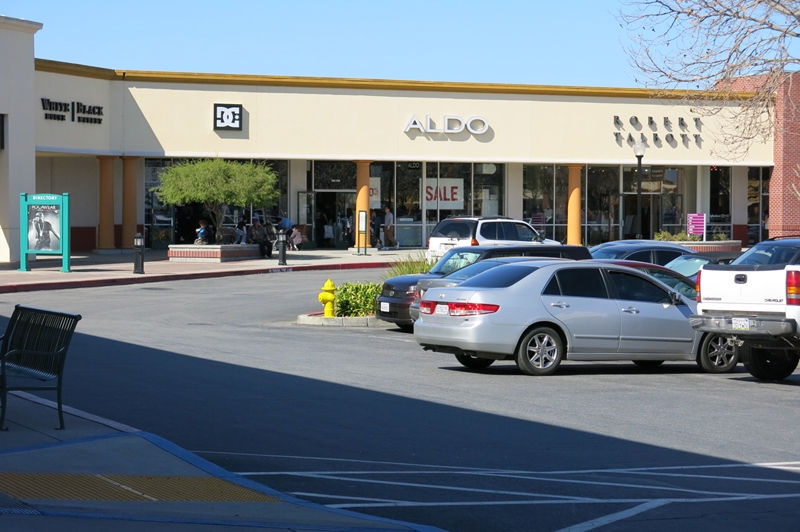 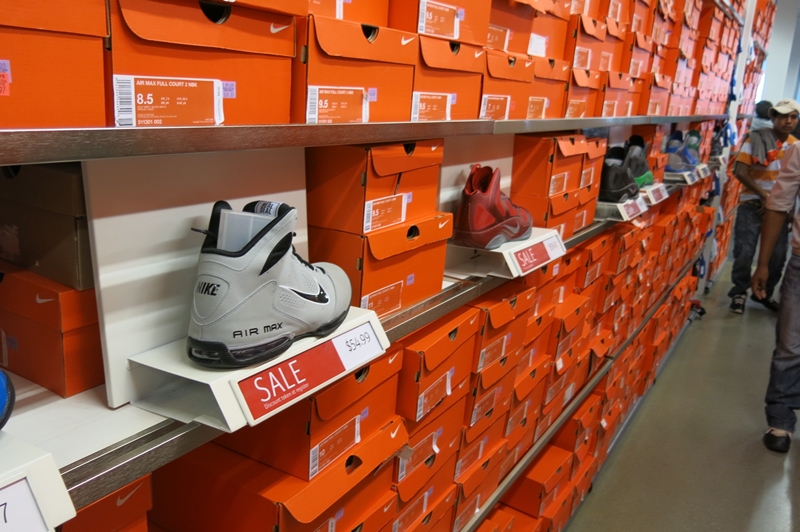 When I got back to my room at the Marriott Hotel after shopping, I fell on the bed and slept. I guess it’s true. I shopped until I dropped. Imagine going 48 hours without rest. 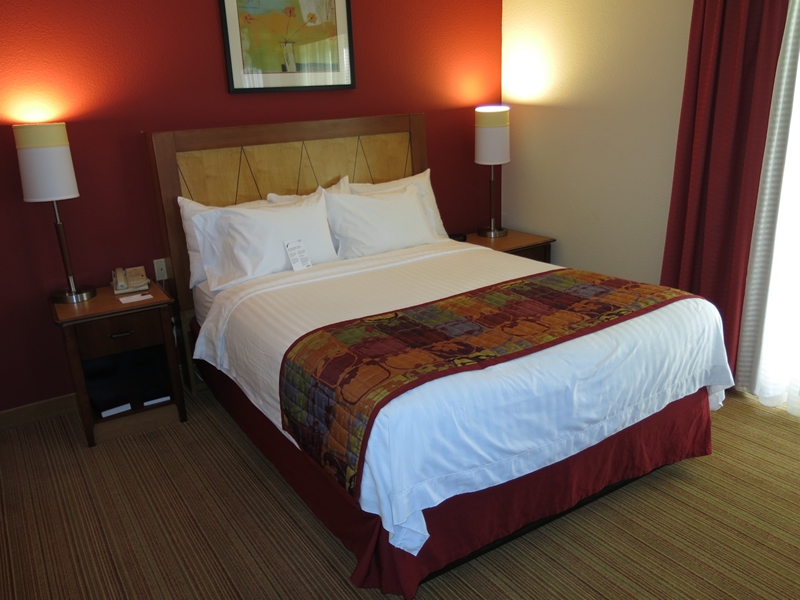 Early morning the following day, we took a subway train and headed over to San Francisco proper. I underestimated the weather in San Francisco. Thinking that it would be warmer because it is spring, I brought a thin jacket with me and left the thicker ones at the hotel where I stayed. I regretted making that decision after I found myself shivering at the subway because the temperature was 8° Celsius cold. Brrr. 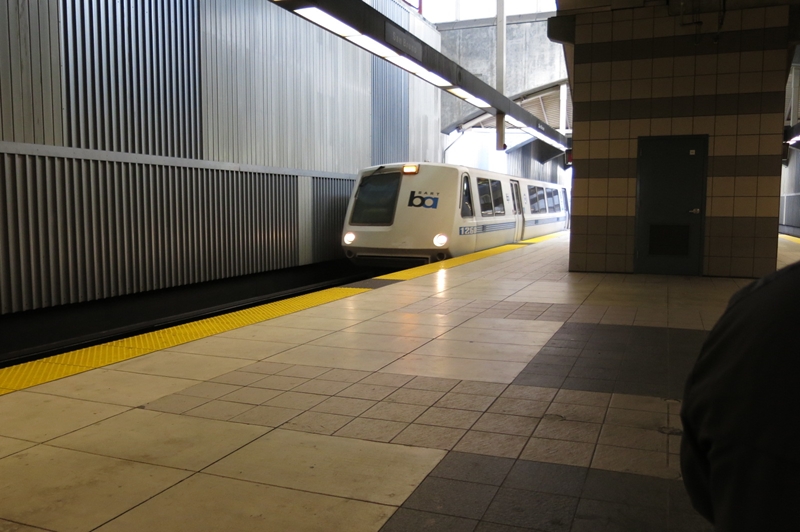 When we reached our destination in Powell Street, we looked around and then again, we found the place to be fully-packed with signature clothing brands. It’s madness. My credit card was already smoking.

Unlike Gilroy however, the items here are being sold at regular prices . But still, it is the place to be when you are looking for Abercrombie & Fitch, Forever 21, Gap and so on. 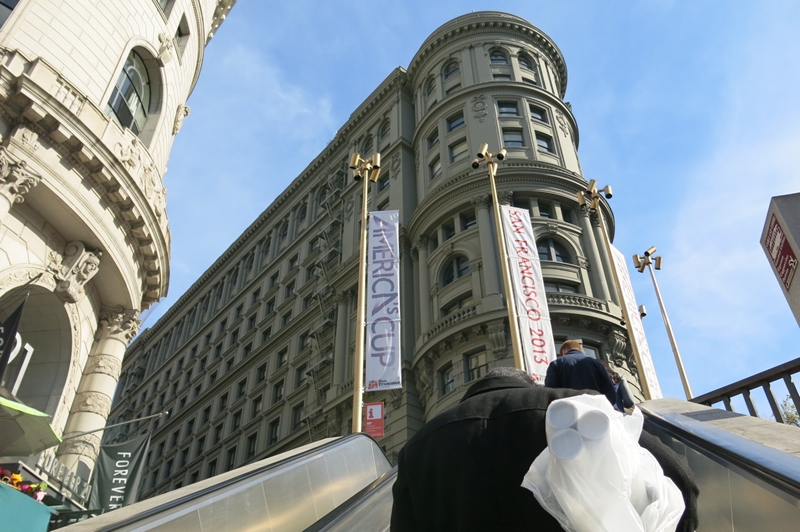 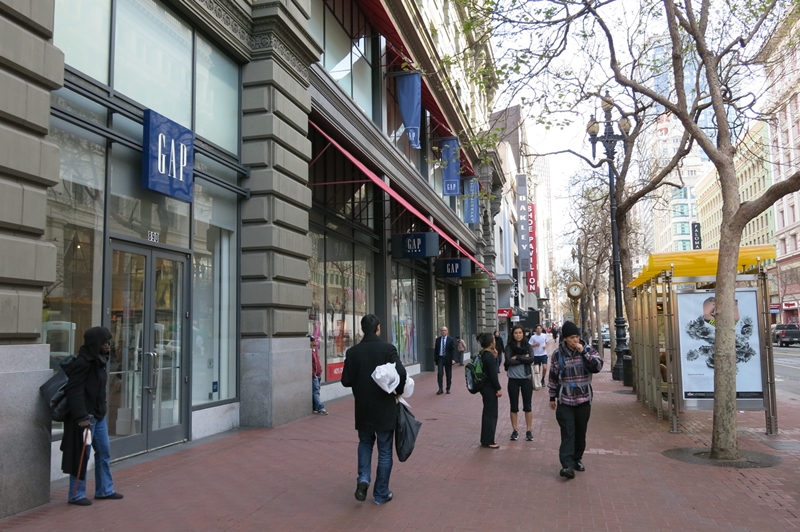 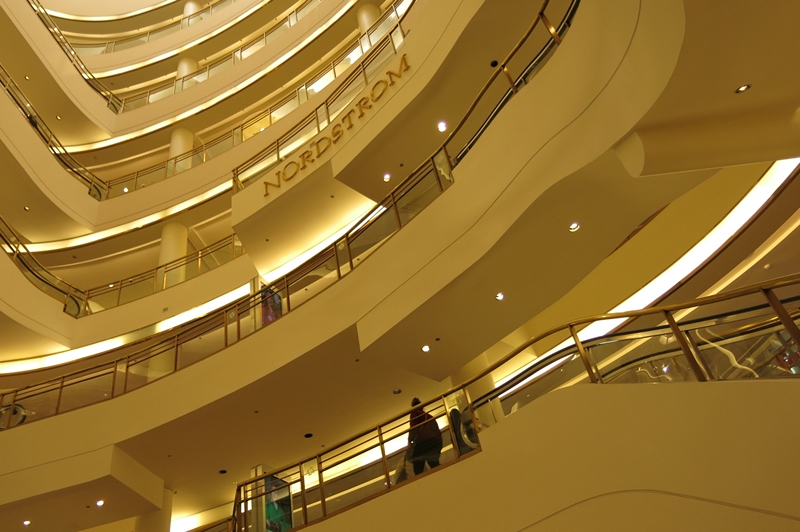 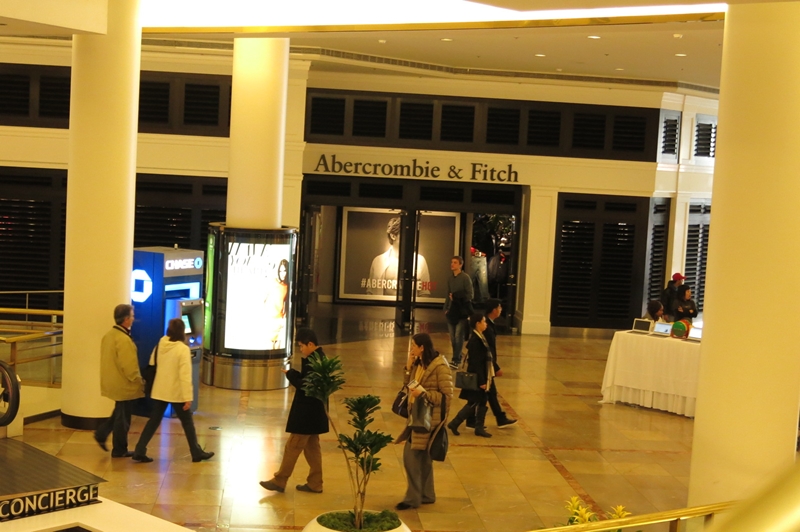 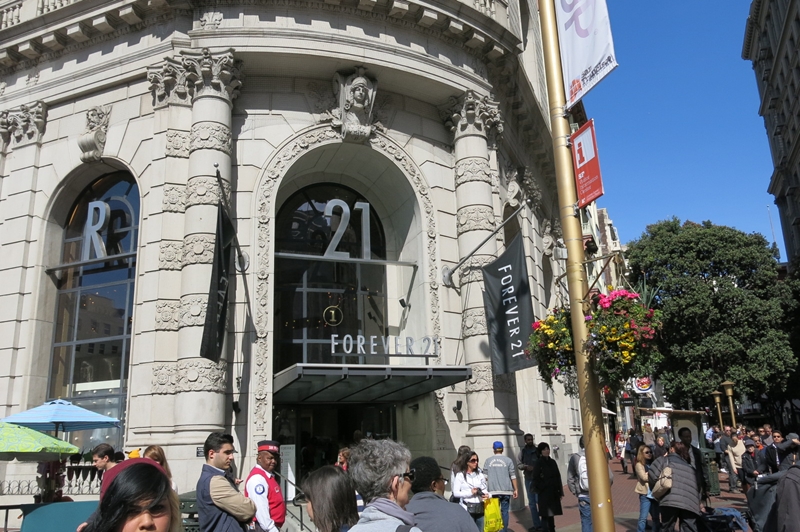 And because I was literally freezing due to the cold weather, I had to buy a thick leather jacket. And this is what I got. Pretty stylish. It cost me 45 US Dollars.  I wore it on top of my melon-colored polo shirt from Dockers. 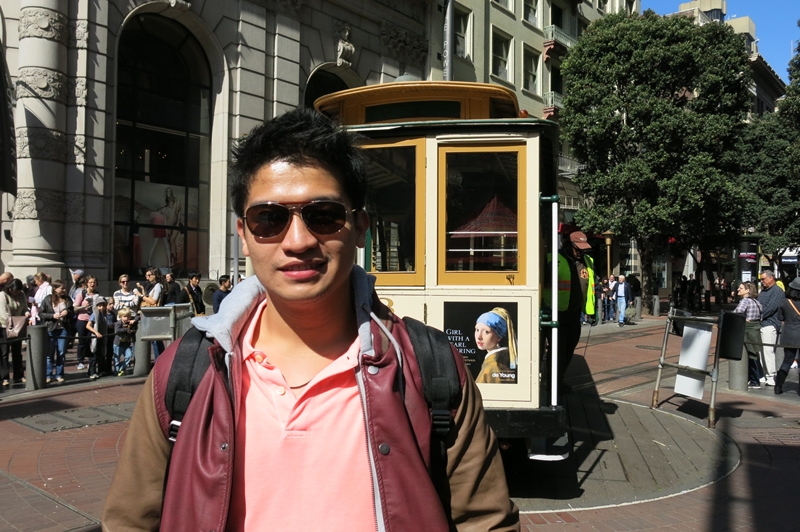 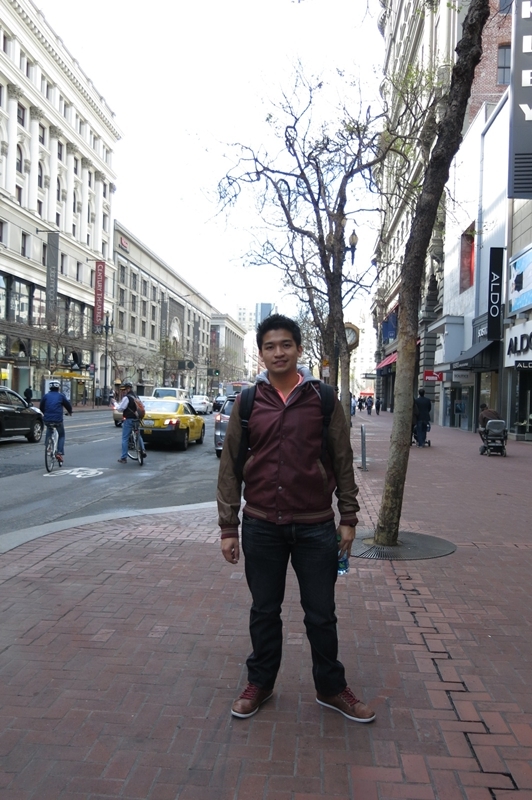 Then we toured the city. First we rode the cable railway car. The railway car is hauled by a continuously moving cable below the ground running at a constant speed. Individual cars stop and start by releasing and gripping this cable as required. It was a fun and thrilling ride. 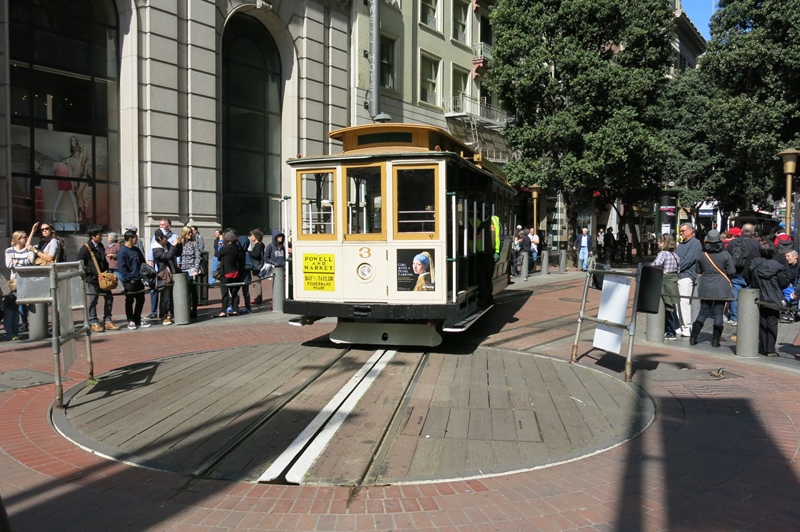 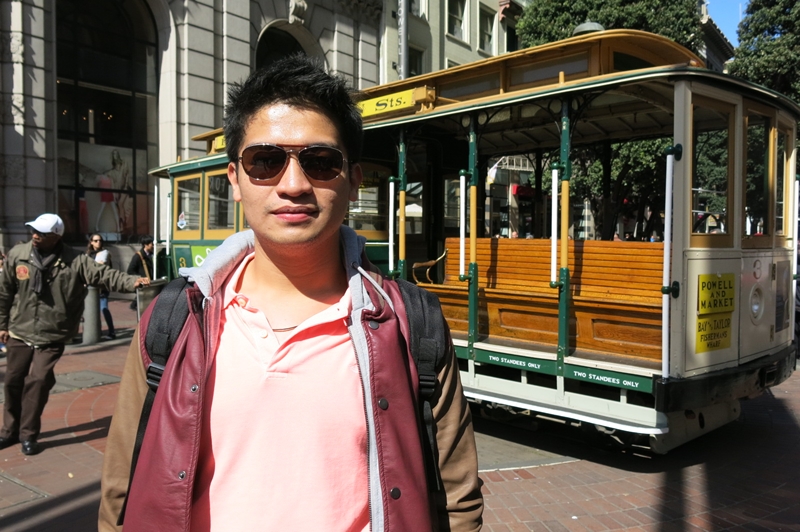 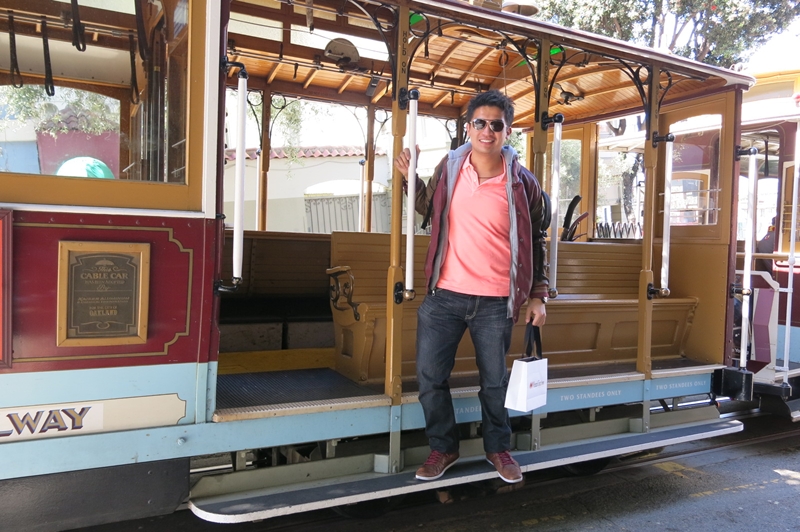 Afterwards, we went to Fisherman’s Wharf, a tourist attraction in San Francisco Bay Area. There are many restaurants and museums to see including that of Ripley’s Believe-it-or-Not. 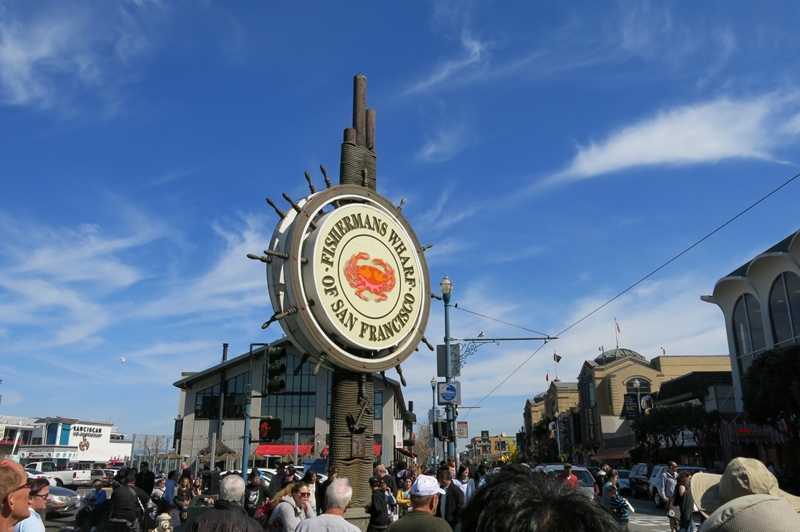 We also went to one of the oldest chocolate factories in the USA called Ghirardelli. These folks produce really good chocolates. I got myself three bags! Hoarding in every sense of the word. 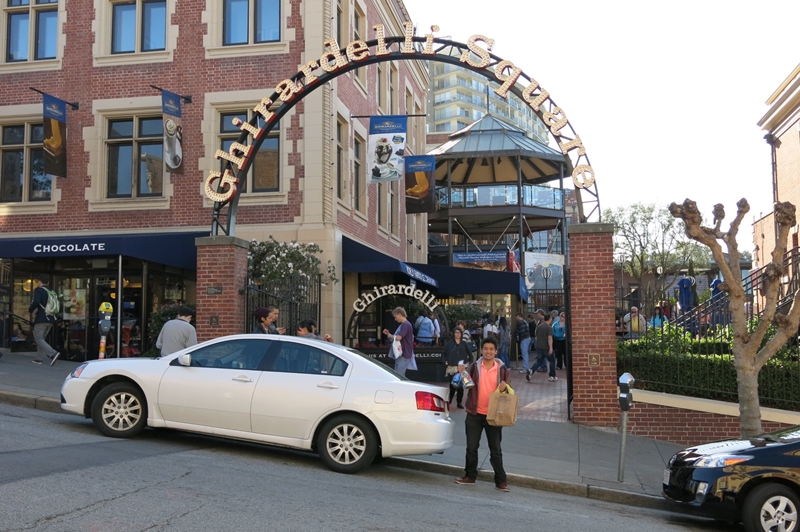 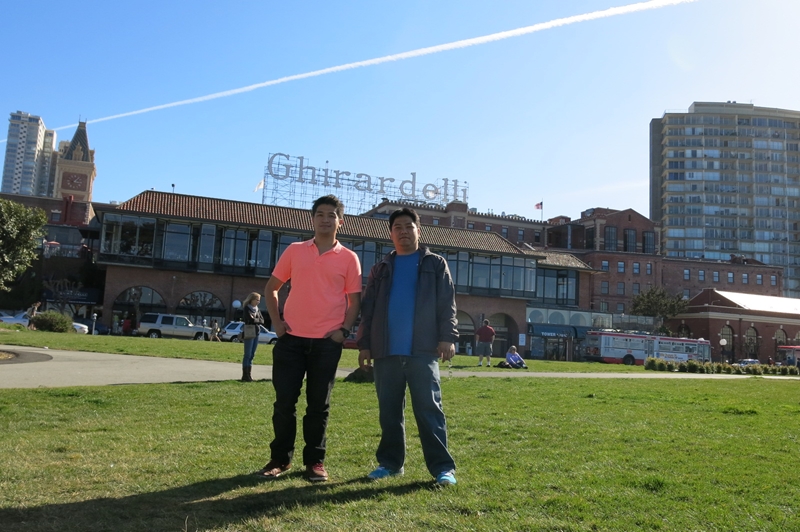 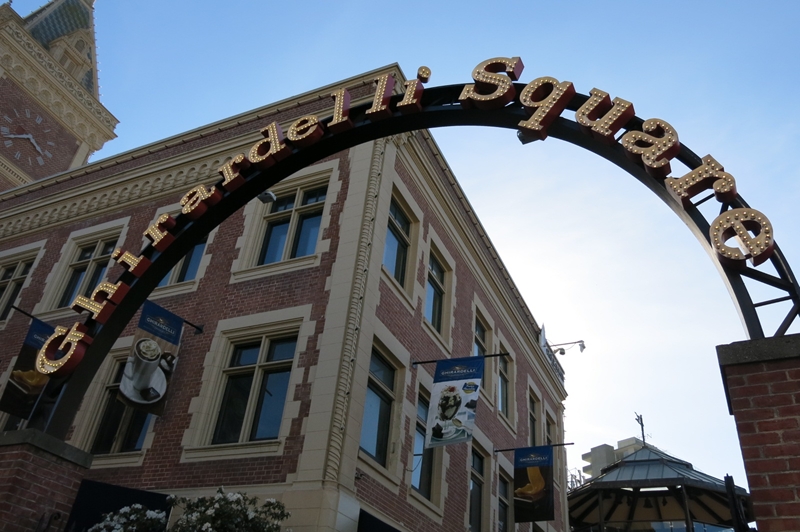 Then we hung out by the beautiful bay and here you will see a full view of my Dockers shirt which my female friends really like on me. 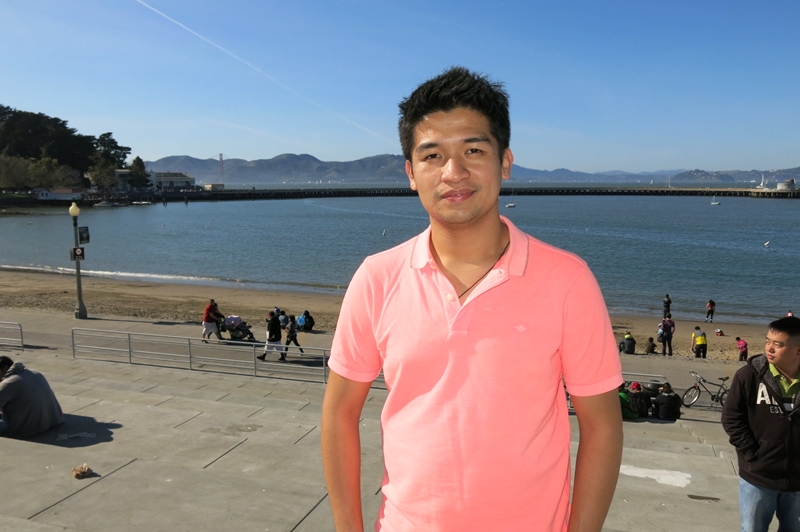 Then on our way home, Paolo and I took a bus and we fell asleep. We woke up half an hour later as the last two passengers of the bus. We were at the end of the line and yes, we got lost. Too much sleeping is not good.

It was freaking scary getting lost in the middle of nowhere. Good thing we managed to find another bus that will take us back to the subway station.

That’s all folks for this time. More updates about my adventure here in San Francisco coming soon. Thank you by the way to Dockers Philippines for my shirt. I hope to see your headquarters here in San Francisco if I get the chance. Thank you also to Canon Philippines for the camera. Just for the record, all photos in this post were shot using the Canon Powershot G15 Camera which is perfect for my trip! 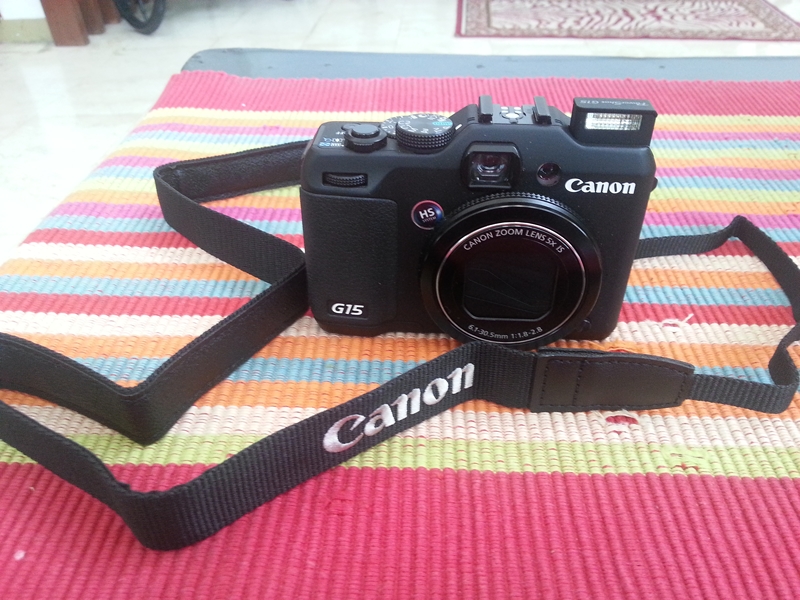 One final word: Save Me San Francisco (from spending too much). There’s so many things to see here and so many things you can buy but I feel I have so little money.

Cris, I think you are spending way too much. Don’t wait until you realize that you are already 6 feet under a huge debt. Be reminded that you are there as an onshore resource and not a tourist. If you are on short assignment, likely your hotel accommodation is on the company but if its for a long assignment, you will have to find an apartment and pay it using your cash. Lastly, plan your budget and know how much will you spend on your food, accommodation, transportation, and if you are planning to save money.

It’s good to have fun sometimes but don’t get carried away..

james – yep, they are really discounted so you’ll be tempted to buy.

hunkrder – yep thanks for the tip. After a week, I can now control myself. LOL. 🙂

hiei – thanks man for the tips.

I’ve been to ROSS, they are pretty good.

I think that Great Mall is better than Gilroy in my opinion. Also, it was my first time to see True Religion shops. I like their jeans although they are somewhat a bit pricey even in their discounted outlets.

Anyway, where in California do you live? We should have met so that you could have taken us to those stores you mentioned.

I think TR has also a store @ Gilroy outlets. If TR is your cup of tea, check Nordstrom Rack and Saks off fifth because True Religion, Rock and Republic, 7 for all mankind, AG, citizen for humanity and other similar ‘premium’ jeans concept are staple fare @ those stores.

I suggest checking Self Edge SFO, they have the real deal jeans from high quality Zimbabwe cotton and made by vintage looming machines. Fair warning they are stiff as f*ck and heavier than average denim… 2 popular reasons why its not for everyone. Both stores are well worth visit and great feature article that deviates from usual mainstream trend. The guys (kiya from Selfege & Arthur form The Archive) behind them are very much accommodating and would entertain your questions. Telling them you’re a fashion blogger can open doors to healthier orientation on how their segment should be perceived. In terms of how they compare with our local stores. Self Edge is much better than viktor, coz these are the same jeans they try to emulate. Better selection than adora and homme et femme combined. The archive is similar to our high end store univers and homme et femme but dwells more on the darker side of avantegarde fashion. Lastly, I think you’ll be the first one to feature these guys sa Pinas 🙂

hiei – how I wish I had plenty of time to visit all these shops hahaha. maybe on my next visit.

Aside from the outlets and the designer stores, you should also definitely check out the indie stores in the side streets of downtown San Francisco. Haight and Ashbury are my favorite places to shop! These stores sell one of a kind stuff you can’t find anywhere 🙂

[…] when I was in the States a few weeks ago, I felt so greedy when I saw discounted shoes in factory outlets. I bought three […]

[…] I walked the runway for their fashion show. Then some time in March, the IT company I work for sent me to San Francisco, California to visit our office headquarters and I could never be as grateful to them. After the short trip, I […]

[…] discovered this cologne while I was buying a shirt at an Aéro store in San Francisco last year. And yes, you can find it here in Manila at the newly opened Aéro stores in the […]